The Godfather of Shock Rock invites you to A Paranormal Evening With Alice Cooper, coming to Des Monies Civic Center on Tuesday 23rd October 2018! The iconic performer will be bringing his classic hits to the stage, as well as new material from his 27th studio album, Paranormal! With his theatrical performances, pyrotechnic wizardry and over fifty years' worth of music to build a set-list from, Alice Cooper creates an unforgettable show! Tickets available now! 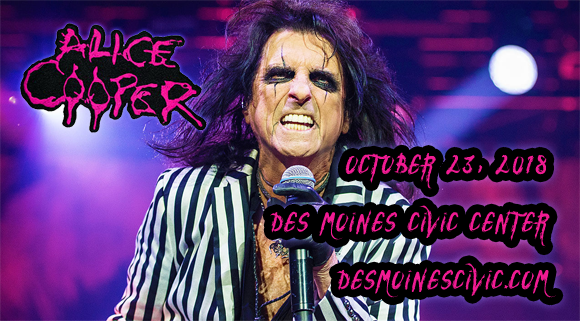 Taking his name from a five-piece band that he formed in Phoenix, Arizona in the late 1960s, Alice Cooper an American singer, songwriter, and actor. The original Alice Cooper band had a hit in 1971 song "I'm Eighteen" from their third studio album Love It to Death. Their following album, Billion Dollar Babies (1978), hit number one in both the US and the UK, and was certified platinum. Cooper began to use his stage name upon embarking on a solo career in 1975, debuting with the concept album Welcome to My Nightmare. Credited with having a significant influence on the sound and imagery of heavy metal with his love of horror and flair for the theatrical, Cooper has built a reputation as being the world's most "beloved heavy metal entertainer" in his five-decade career. He has released twenty seven albums to date.